We should all be aware of the hazards of the Standard American Diet (SAD). Yet with 25% of calories from animal products and over 60% from processed foods; this way of eating has helped to create an over-fed but under-nourished population which is being ravaged by obesity, heart disease, cancers, strokes, diabetes and many other diet-related illnesses. Diet and Lifestyle-related diseases are the most common causes of death in the United States, but according to a 2011 poll by Consumer Reports Health, 90% of Americans believe they eat a healthy diet (That poll also found that 33% of overweight and obese individuals believed they were a healthy weight).

Clearly, American’s have no clue what healthy foods look like and since food in the produce aisle doesn’t get a nutrition label, Eat Right America, an organization founded by Dr. Joel Fuhrman, created the “ANDI” system or the Aggregate Nutrient Density Index, as an index to help guide our eating habits.

Basically, Dr. Fuhrman designed a rating scale which ranges from 1 to 1,000. Obviously the higher the rating, the healthier a food is. For instance, sitting at the top of the chart with big smug smiles are kale, collards, mustard greens and watercress all with a perfect ANDI score of 1,000. Soda, on the other hand, looks rather glib, as it’s earned the lowest possible score: 1 (although coke actually has more antioxidants than eggs and many meats!).

So where do the numbers come from? Well, Dr. Fuhrman obtained nutrient data for an equal caloric amount of each food item. He focused on the following:

Dr. Fuhrman prefers: Health=Nutrients/Calories, as he says, “Adequate consumption of micronutrients – vitamins, minerals, and many other phytochemicals – without overeating on calories, is the key to achieving excellent health.”  As such, the ANDI scoring system ranks food according to micronutrients per calorie, including vitamins, minerals, and as many known beneficial phytochemicals as possible. In other words, foods that have a lot of nutrients that are lower in calories will have a higher score on the ANDI system. This helps explain why leafy greens top the chart- lots of nutrients and low in calories! 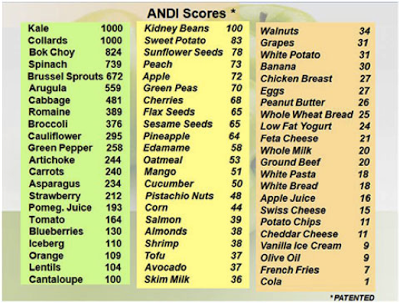 While the ANDI score seems like a great way of identifying the healthiest foods at the store, it does have a few drawbacks –some are quite serious. Mainly, if you take this idea too far, you’ll conclude that only the top foods should be consumed, but that isn’t necessarily true. If you consumed only the highest scoring foods, it would be very difficult (maybe impossible) to get a sufficient amount of calories and your diet would be too low in fat to function properly As such, eating a healthy mix of foods is important. But where on this scale can we find which fats should be consumed?

Furthermore, you’ll also notice healthy foods like avocados, bananas, and potatoes are all ranked pretty low, however, this doesn’t necessarily mean they are unhealthy but rather that these foods have a lower nutrient density due to their rich calorie counts. Dr. Fuhrman says these foods should still be consumed, just in smaller quantities than the foods at the top. Still the problem remains that someone needs to already be aware of this fact and also needs to already be aware of what foods are healthy - hence defeating the purpose for the scale to begin with.

Another drawback is that many foods have not been calculated yet. Dr. Fuhrman, reasonably, focused on the most widely available foods, but many foods such as chia seeds have not yet been rated. Other foods have been rated but are rarely labeled anywhere other than in Dr. Fuhrman’s book, which must be purchased (whether he expects people to carry this book around with them similar to Weight Watchers is unclear). By making the ANDI system a for-profit club, it successfully limits it's usefulness and restricts it's outreach.

But the most serious flaw with this system is that Dr. Fuhrman’s index makes healthy eating more confusing - not less. He tells all of his patients that the key to optimal health is through eating a diet primarily of green and yellow vegetables (think kale, bell peppers, and carrots) along with some fruit and limited amounts of starches like beans, rice and potatoes. He also says optimal health can only be achieved by completely avoiding animal products and limiting oil to less than 10% of total calories consumed. He has written widely on supporting a healthy immune system as well as preventing and even curing many diseases through diet. Since meat, dairy and processed foods have all been linked to increased risks of disease, even though they have many macro nutrients (none of which can’t be found in the plant kingdom) he argues that to achieve optimal health, they need to be completely avoided. I fully endorse those eating principles, although I think starches play a more important role in satiety than he admits.

But does his system fully make those principles clear? To me the chart implies that eggs, a food which contains large amounts of cholesterol and saturated fat are healthier than bananas. Obviously Dr. Fuhrman doesn’t believe that to be true, but when you are simply looking at the numbers that is the logical conclusion you reach. Again Dr. Fuhrman is subconsciously basing his index on the belief that the people who need this information already know which foods are healthy, and which are not. This fault could have serious health implications for some individuals. 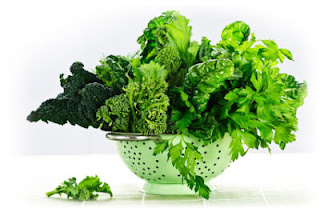 Another serious problem is that the dark leafy greens mentioned above all have a perfect score of 1,000, yet those foods do not have all the necessary nutrients for healthy living. How can a nutrition rating system give a perfect score to a food that does not complete all of our required nutrients?

Finally, I have an issue with the implementation of the system. ANDI has currently only been adopted by Whole Foods Market as part of their larger initiative called “Health Starts Here.” I understand that processed foods are nearly impossible to accurately test for all the nutrients the ANDI algorithm requires, (Dr. Fuhrman argues all highly refined and processed foods should also be avoided) but we do know soda earns the lowest score. Yet, Whole Foods hasn’t labeled their sodas. To my knowledge, they have not labeled their meats, fish, or eggs either. So instead of an educational resource helping to guide customers into making smart purchases (preferably plant-based), what we are left with is a nutrition rating system that turns the produce section into a popularity contests and leaves people feeling guilty for choosing broccoli instead of brussel sprouts. I believe this completely defeats any benefits the ANDI system could potentially have.

Instead of rating fruits and vegetables and forcing them to compete amongst one another, we need to focus people's purchasing habits on buying any of the fruits and vegetables they are most-likely going to eat the most of. Even those fruits and veggies on the lowest end of the ANDI system will have far more benefits than consuming processed or animal foods. Ideally, in the future all products that do not support our general health (like meats, dairy and processed foods) will carry a warning similar to cigarettes. Until that happens the best thing we can do is educate people about the dangers those foods contain, and encourage them to avoid any food that once had a mother.

Promote Your Page Too